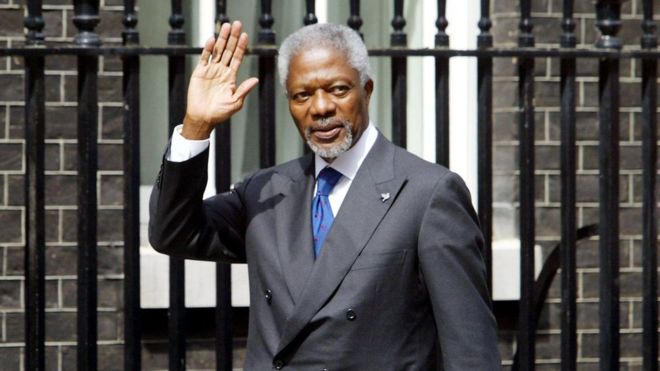 On May 31st 2019, the United Nations Postal Administration will release a new stamp in honour of its founding chairman, the late Mr. Kofi Annan.  The stamp features a portrait illustrated by famed artist Martin Mörck.

The new stamp has Mr. Annan’s portrait with a price of one dollar and 30 cents.

It carries a famous quote by the late diplomat which reads ‘’To live is to choose. But to choose well, you must know who you are and what you stand for, where you want to go and why you want to go there’’.

Kofi Atta Annan was a Ghanaian diplomat who served as the seventh Secretary-General of the United Nations from January 1997 to December 2006. Annan and the UN were the co-recipients of the 2001 Nobel Peace Prize.

Kofi Atta Annan was born in Kumasi on April 8, 1938. He is a royal from Akwamufie in the Eastern Region of Ghana.

He attended the College of Science and Technology Kumasi. At the age of 20, he won a Ford Foundation scholarship for undergraduate studies at Macalester College in St. Paul Minnesota, where he studied economics.

Even then he was showing signs of becoming a diplomat or someone skilled in international relations.

Annan received his bachelor’s degree in economics in 1961. Shortly after completing his studies at Macalester College, Annan headed for Geneva, Switzerland, where he attended graduate classes in economics at the Institut Universitaire des Hautes Etudes Internationales.

Annan was appointed Secretary-General by the UN General Assembly in December 1996 and began serving his four-year term of office on January 1, 1997, a term that was renewed for another four years.

Annan died on the morning of 18 August 2018 in Bern, Switzerland, at the age of 80 after a short illness.

See the new stamp below: 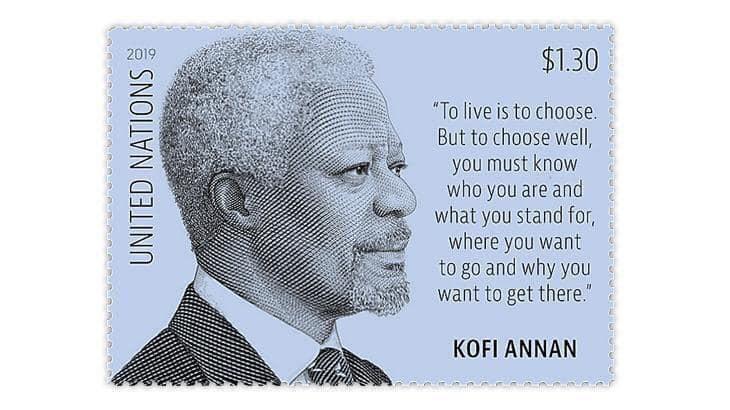