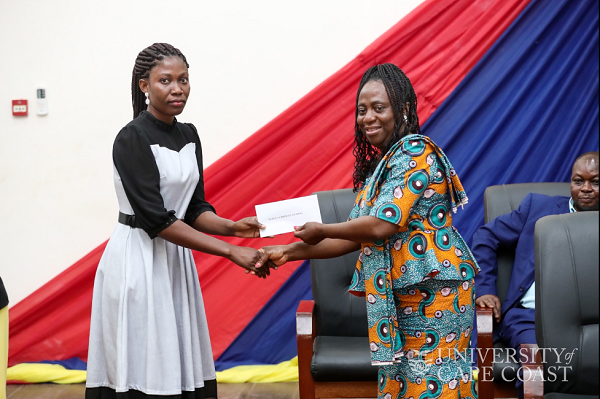 Fifty-seven postgraduate research students of the School of Graduate Studies, University of Cape Coast (UCC) have been awarded GHS 300,000 research grant to enable them produce timely and quality research work.

Out of eighty-two (82) applications received by the School, fifty-seven (57) applicants – four (4) PhD and fifty-three (53) MPhil students – were chosen.

Sponsored by Samuel and Emelia Brew-Butler and the Graduate Students’ Association of Ghana (GRASAG), the grant is specifically aimed at supporting research students to publish their scholarly articles in recognised local and international journals, as well as attend research conferences.

The keynote speaker, a former Vice-Chancellor of the University of Education, Winneba, Prof. Jophus Anamuah-Mensah, said that Post Graduate Research (PGR) opened the minds of students to develop analytical capabilities that were required for knowledge production and transfer of knowledge for development.

According to him, universities, through PGR, had made significant contributions to Ghana’s economy and urged students to concentrate on issues that would bring change to society.

He explained that inadequate funding was hampering researchers in universities from producing groundbreaking research findings.

“If our universities cannot lead in research, then they will not be able to create new knowledge, but (they) will be forced to circulate old knowledge,” Prof. Anamuah-Mensah said, revealing that Ghana spends a paltry 0.4% GDP on research and development.

He, therefore, pointed out that adequate investment in research would bring about growth and development in the country and as well as transform the socio-economic sectors by ensuring the robust promotion of cutting edge innovations.

Prof. Anamuah-Mensah, who governed the University of Education between 1998 and 2007, hailed the invaluable contributions of Nana Brew-Butler (a former Chairman of UCC Council) towards the School of Graduate Studies.

The former Vice-Chancellor suggested that the School of Graduate Studies be named after Nana Brew-Butler in recognition of his financial assistance towards research work at the School.

Chairing the ceremony, the immediate past Dean of the Faculty of Law, Prof. Philip Ebow Bondzi-Simpson, advised the awardees to be diligent and ethical in the conduct of their research work.

He added, “Ethics is a necessary component of research. Knowledge is not enough. Many knowledgeable people are unethical and an unethical knowledgeable researcher is a danger to society and research.”

Prof. Bondzi-Simpson, who represented the Pro Vice-Chancellor, Prof. Rosemond Boohene, urged the beneficiaries to use the money for its intended purpose.

He said UCC should have a naming and endowment policy to honour individuals for their immense contributions to the University.

“UCC will have to be thinking of having a naming and an endowment policy. In other jurisdictions, schools and buildings are named after people” he said in response to the suggestion of the keynoter.

The Dean of the School of Graduate Studies, Prof Sarah Darkwa, in a short remark, observed that the School would continue to mentor and monitor the students until the final research output was out.

On behalf of the awardees, Miss Susuana Asaam, an MPhil student with the Department of Animal Science, expressed gratitude to contributors of the Fund and pledged to do ethical research work.