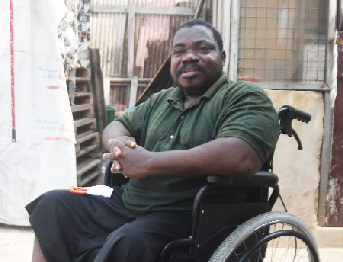 All persons with disabilities (PWDs) who lost their jobs following the discontinuation of road toll collection will continue to receive their salaries until they are reassigned by the Ministry of Roads and Highways.

This follows a government policy directive for them to draw their salaries while waiting to be redeployed to suitable areas.

The Head of Public Relations of the Ministry of Roads and Highways, Mr. Nasir Ahmad Yartey, said a directive had been issued for the PWDs to receive their salaries pending retraining and redeployment.

“Just this afternoon, the minister (Mr. Kwasi Amoako-Atta) met representatives of the PWDs who worked as toll collectors, and communicated the government’s policy to pay all of them until they are reassigned.

“The minister also assured them that all those with outstanding salaries will have the money paid within one week,” he said.

Mr. Yartey, however, said the PWDs would need to be retrained before deployment.

“A proposal on what kind of work they can do and the training they require has been submitted to the minister, and he is currently reviewing it. Very soon, the minister will meet the Commission on PWDs and toll collectors and communicate details of the training and deployment modalities to them,” he added.

The fate of the PWDs had been hanging in the balance two months after the suspension of toll collection by the Ministry of Roads and Highways.

Although the ministry had indicated in a statement dated November 19, 2021, that the PWDs would be redeployed to play other roles, the Daily Graphic’s checks showed that they were currently at home.

The paper also found that 190 PWDs who worked under toll booths that were managed by Tolls and Routes Management Limited (TRML), a private company, have not been paid for the last three months — from November 2021 to January 2022.

Some of the PWDs said their situation had worsened, stressing that they now struggled to meet basic needs, including food and utility bills.

They, therefore, appealed to the government to redeploy them and ensure the payment of their outstanding salaries.

One of the PWDs, Mr. Anthony Adarkwah, who worked at the Dodowa toll booth, said he was struggling to feed his family because he had not been paid since November 2021 and had no work to do.

At his Labadi home last Friday, he narrated how he had to remain indoors and hope against hope for the government to restore his job.

“It was a very good policy by the government to employ PWDs at the toll booths. We were paid GH¢700 every month. Although it was too low, it helped us a bit to survive. Ever since the toll collection was ceased on November 17, life has been difficult for us,” he said.

Mr. Adarkwah, who was the President of the Greater Accra Regional branch of the Ghana Federation of Disability Organisations (GFD), said their colleagues who worked at toll booths under the management of the Ghana Highway Authority (GHA) had received their salaries, while those who were under the TRML had not received anything yet.

Mrs. Mavis Esi Adarkwah, one of the PWDs and wife of Mr. Adarkwah, shared similar sentiments.

She said she had also not been paid her salaries since November 2021, and had not been reassigned to perform other roles either.

The General Manager of TRML, Mr. Samuel Abrah Adjei, told the Daily Graphic that efforts were being made to pay the PWDs who worked under the company.

“We admit that we owe them salaries for November 2021. The government promised to pay them the December salary.

“We have submitted claims to the government, and as soon as they pay the claims, we will pay the workers,” he added.

The Minister of Roads and Highways directed the immediate cessation of tolls collection across the country, effective 12 a.m. on Thursday, November 18, 2021, on the back of government’s plan as announced in the 2022 Budget to Parliament to scrap tolls on all public roads.