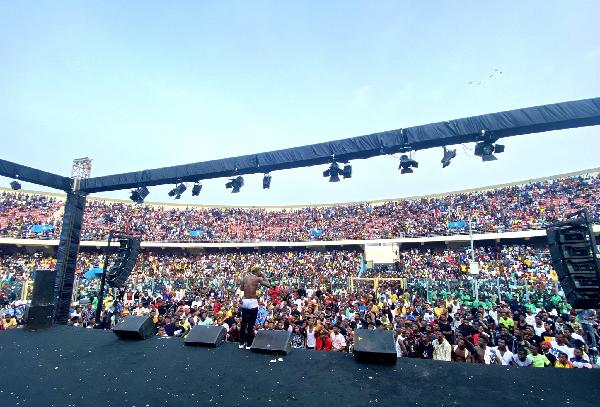 The second edition of the Freedom Wave concert lived up to its billing as many fans attended the show at the Accra Sports Stadium on Christmas Day, reports the Ghana News Agency.

Hosted by Shatta Wale and Medikal, the Freedom Wave concert was a gigantic musical showpiece as fans from all walks of life witnessed some amazing performances.

Shatta Wale, who made a triumphant entry to the stadium with a long convoy of plush cars, demonstrated his unique stagecraft with some dazzling performances.

As he did at the first concert, Shatta Wale thrilled the fans gathered with some spectacular performances until the morning of Boxing Day.

His cohort, Medikal, also didn’t disappoint on the night, as he left patrons stunned with some thrilling performances.

The award-winning rapper had fans cheering him on and mimicking the lyrics of some of his groundbreaking singles, including Omo Ada, Ayekoo, and many more.

With tickets going for as little as GH¢20, the second edition of the Freedom Wave would go down in history as one of the most successful music concerts in Ghana.