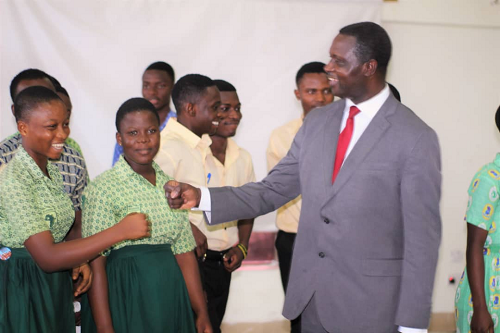 The Ministry of Education has disbursed GH¢133,950,053 to the National Food Buffer Stock Company Limited and the Ghana Education Service to cater for recurrent expenses, including perishables, for senior high schools (SHSs).

“Contrary to claims of the non-payment of recurrent fees, feeding (perishables) and intervention grants, the ministry has disbursed a total of GH¢133,950,053 to the National Food Buffer Stock Company Limited and the Ghana Education Service to cater for recurrent expenses, including perishables,” the Minister of Education, Dr Yaw Adutwum, told the Daily Graphic in response to a press conference by the National Association of Graduate Teachers (NAGRAT) last Thursday.

According to the association, payment of the recurrent fees for forms Two and Three students had not been done.

Addressing the media, the President of NAGRAT, Mr Angel Carbonu, said, for instance, that the admission fee of GH¢10 per student was still outstanding, with the cumulative record fees of forms One to Three students still unpaid.

Day students, he said, had also still not had their development levy paid.

In addition, Mr Carbonu said it was expected that before schools reopened, the Buffer Stock Company would have done its duty by supplying the various schools with their foodstuff needs.

On claims of interference, as alleged by NAGRAT, especially with regard to the appointment of headmasters and headmistresses for the new Science, Technology, Engineering and Mathematics (STEM) schools, Dr Adutwum said “the ministry has no plans to recruit headmasters for new STEM schools. NAGRAT should have consulted the ministry before going public”.

According to him, the ministry had not published any advertisement to that effect.

“All steps taken so far for the operationalisation of the STEM schools have been done together with the GES and the TVET Service.

“It is important to emphasise that since the coming into effect of the Education Regulatory Bodies Act 2020, Act 1023, the management of the institutions under the pre-tertiary space is now at the behest of both the GES and the TVET Service,” he added.

Consequently, the minister said, it had become necessary for the ministry to coordinate, monitor and evaluate the efficiency and effectiveness of the performances of these agencies to ensure the harmonious achievement of its strategic outcomes.

“At no point should this coordinative role be interpreted as interference,” he said.

Responding to the issue of deletion of teachers’ names from the payroll and the mode of preparation of lesson notes, a Deputy Director-General of the GES, Mr Anthony Boateng, said as far as management was concerned, problems with those issues had been addressed.

For instance, he said, concerning the deletion of names, after the service received complaints from the teacher unions, guidelines were developed, so that people did not use their differences with others to punish them.

The guidelines, Mr Boateng said, indicated that no one officer should use his or her discretion to remove anybody’s name from the payroll without the approval of the call centre manager.

The complaints of the teacher unions, he said, came at the beginning of this month and the GES was yet to pay salaries to see whether or not they (complaints) existed.

With regard to lesson notes preparation, the minister said since the commencement of the one teacher, one laptop policy, the issue of whether or not teachers should be allowed to prepare lesson notes electronically had been discussed with teacher unions.

He said the consensus was that the preparation of lesson notes should be made flexible, so that where the supervisor and the teacher agreed that it should be done electronically, then it should be allowed, since not all teachers had received the laptops.