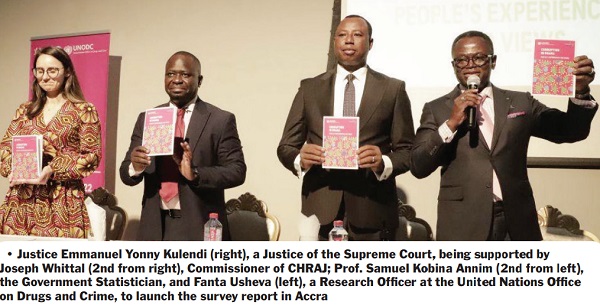 Nearly GH¢5 billion was paid in cash as bribes to public officials last year, a new survey that gauges the actual payment or actions that constitute bribes has revealed.

The 2021 maiden Ghana Integrity of Public Services Survey (GIPSS) report, which was launched in Accra yesterday, is the first survey on the actual payment of bribes, a departure from the perception that previous studies surveyed.

The report indicated that nine out of 10 bribes were paid in cash.

The cash bribes, it revealed, were equivalent to almost one-third of the 2021 budget of the Ministry of Education.

The GIPSS is a nationally representative population-based survey that provides internationally comparable measures of corruption.

The Commission on Human Rights and Administrative Justice (CHRAJ) commissioned the survey, in collaboration with the Ghana Statistical Service (GSS), with support from the United Nations Office on Drugs and Crimes (UNODC).

The fieldwork involved a survey of 15,000 respondents, one of the biggest sample sizes, in both urban and rural areas of all regions of the country.

The report covered the scope of bribery, who takes bribes, how bribery works, gender dimensions, nepotism and vote buying in Ghana.

The Deputy Commissioner of CHRAJ, Richard Ackom Quayson, at the launch of the report yesterday, explained that the GIPSS was the first comprehensive, nationally representative population survey on corruption, with the sole purpose of collecting evidence-based information on forms of corruption affecting the population.

He said the survey would help determine corruption prevalence and prevailing typologies for purposes of targeted policy interventions that could enhance the fight against corruption.

“In order to fight corruption more effectively, it is critical to improve society’s understanding of its different manifestations and make regular, scientifically based efforts to measure its occurrence,” the Deputy Commissioner of CHRAJ said.

He also touched on how the GIPSS would support the achievement of the goals of the National Anti-Corruption Action Plan (NACAP) and the Sustainable Development Goal (SDG) 16 and Article 61 of the United Nations Convention against Corruption.

The Government Statistician, Professor Samuel Kobina Annim, who presented highlights of the report, indicated that more than a quarter of the adults among those surveyed, representing 26.7 per cent, had paid bribes in the 12 months preceding the survey, mainly in 2021.

However, he said, there was significant regional variation in the prevalence of bribery, ranging from 53.4 per cent in the Western North to 11.8 per cent in the North East.

He said there were also gender differences in the likelihood of requests for sexual favours among the surveyed when interacting with government officials, with 2.6 per cent of females receiving such requests, compared to 1.1 per cent of males.

The Government Statistician said slightly more than 10 per cent of adults were offered bribes for their votes in the 2020 elections.

The frequency with which bribes are paid was another important dimension of public sector corruption, according to the survey.

It indicated that bribe payers paid an average of fi ve bribes in the 12 months prior to the survey, resulting in an average of 0.98 bribes paid per adult in 2021.

A Justice of the Supreme Court, Justice Emmanuel Yonny Kulendi, who chaired the occasion on behalf of the Chief Justice, applauded the institutions for conducting the survey.

He noted that the quest to enhance professionalism, effectiveness, integrity, accountability and transparency in all sectors of the country would be impossible without such data.

Justice Kulendi also called on the public to embrace the survey and accept the results, coming as they were from reputable organisations.