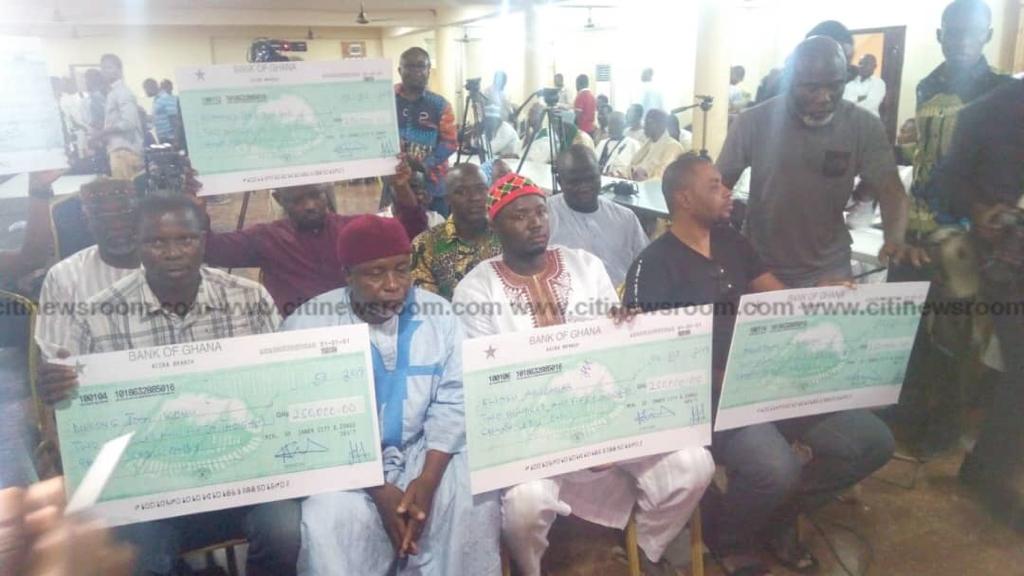 Government has presented cheques of GH₵250,000 each to families of the seven young men killed by police at Manso-Nkwanta in the Ashanti Region in July 2018.

The presentation ceremony was done at the Kumasi Central Mosque in the Ashanti Region yesterday.

The Minister for Inner-Cities and Zongo Development, Mustapha Abdul-Hamid, who presented the cheques, was hopeful that the unjustified killing of the youth in the Zongo community would cease when challenges such as illicit drug and vigilantism are tackled within such communities.

“When we said we will want to come and make the presentation on this day, the elders of the Zongo community had also already established that today there will be a gathering of young people and leaders from Zongo communities to talk about illicit drugs and the unfortunate phenomenon of vigilantism.

“I think that the two objects go hand in hand because if we succeed in rooting out drugs and vigilantism from our Zongo communities, I believe that in the future you will not anymore be talking about the illicit killing of people,” he stressed.

He explained that, “Even though money cannot replace the life of a human being, it is being offered as a way of accepting the responsibility of the state in this tragic affair.”

The presentation was in fulfillment of President Akufo-Addo’s promise made in January 2019 at the Zongo for Peace and Development Conference, held in the Ashanti Regional capital, Kumasi.

The President pledged a total of GH₵1.750 million as compensation for the families, and said he would ensure that justice is served.

But while the families have commended the President’s decision to offer compensation, they have asked the state to ensure that the police officers found culpable are punished.

The seven-member government committee tasked to investigate the shooting incident found no evidence to suggest that the seven persons who were shot and killed by a police patrol team were armed robbers as the police claimed.

The killings on July 7, 2018 triggered outrage in Zongo communities in Kumasi, with residents insisting on the innocence of the seven.