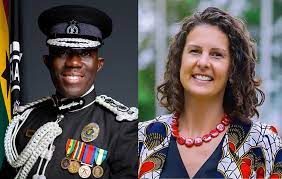 The Inspector General of Police (IGP), Dr George Akuffo Dampare, has advised the British High Commissioner to Ghana not to interfere in matters that do not concern her.

The advice is in reference to the High Commissioner’s tweet over the arrest of one of the conveners of the #FixTheCountry movement, Oliver Barker-Vormawor, over a motor offence.

According to the IGP, the High Commissioner’s tweet sought to tarnish the reputation of the Ghana Police Service and the country.

In a four-page letter dated May, 20, 2022 and addressed to the British High Commissioner, Harriet Thompson, the IGP questioned her interest in the arrest of Mr Barker-Vormawor especially that he was among other drivers who were arrested separately for road traffic offences on Tuesday, May 17.

He added that her tweet was not only “biased” and “uninformed”, but also contravened the Vienna Convention on Diplomatic Relations, 1961 which enjoins diplomatic missions not to interfere in the internal affairs of their host country.

Following the arrest of Mr Barker-Vormawor on May 17 for a traffic offence, the British High Commissioner tweeted, “Oliver Barker Vormawor, convener of #FixTheCountry movement, arrested again, I understand for a motoring offence on his way to court. I’ll be interested to see where this goes…”.

According to the IGP, “Ordinarily, the Ghana Police Service would not have responded to comments such as yours, obviously made from either a biased or uninformed position.

“However, we have learnt from previous, painful experience that it has not been helpful to ignore such misguided, unwarranted, and biased comments intended to tarnish the reputation of the Ghana Police Service and that of our Country.”

Chronicling the events that led to Mr Barker-Vormawor’s first and second arrests, the Dr Dampare asked, “Against this backdrop and in view of the fact that he is not the only person who is being taken through due process for committing an offence in this country, it is difficult to understand why he is your only focus. Are we to understand that you are concerned about the law enforcement process in Ghana or only as applied to your person of interest?”

Concluding the letter, Dr Dampare advised Madam Thompson not to interfere in matters that do not concern her.

“For the moment, we would recommend a Ghanaian saying that might guide you in your diplomatic engagements. The saying goes: – “di wo fie asɛm”— it means learn to keep within the limits of what concerns you.”