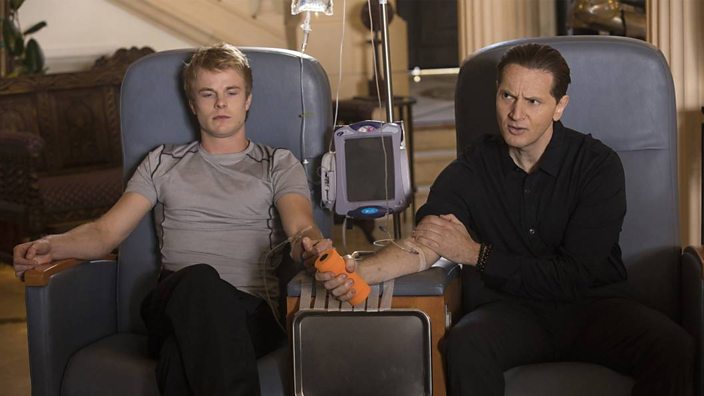 If you’re a millennial, you might have felt for a while now that older generations are out to suck us dry.

To their Yin of affordable housing, secure jobs and actual pensions, we seem to have the Yang of six-figure car garages for homes, ‘gigs’ for jobs, and a retirement age that like a mirage on the horizon, seems to get further away the closer you get to it.

Avocados on toast aside, it’s pretty clear that Yang is not doing well in this relationship.

But the bloodsucking appears to have become a whole lot more literal.

Because the super-wealthy are now pumping themselves with the blood of young people in an attempt to prevent themselves from ageing.

Over 100 people have participated in a clinical trial at a San Francisco start-up offering blood transfusions for older patients. Each procedure costs $8,000 (£6,200) and sees the patient injected with two and a half litres of plasma – the liquid element of blood that remains after other cells have been removed – taken from young people.

The procedure is being offered as an experimental attempt at rejuvenating the elderly. The median age of the patients is 60 years.

Jesse Karmazin, 32, a Stanford-trained scientist who founded the US clinic, told The Sunday Times that the initial results from his patients had been encouraging.

“It could help improve things such as appearance or diabetes or heart function or memory. These are all the aspects of ageing that have a common cause.

“I’m not really in the camp of saying this will provide immortality but I think it comes pretty close, essentially.”

The new treatment comes on the back of several studies over the last 17 years in which Stanford researchers have shown the joining of circulatory systems (known as parabiosis) between old and young mice to be effective in rejuvenating organs, muscles and stem cells. Additionally, a study last year found that the plasma of young people itself had a rejuvenating effect when injected into older mice.

However, despite the results of the mice-based studies, researchers have attacked the scientific validity of Karmazin’s experiment and raised a number of ethical concerns.

“There’s just no clinical evidence [that the treatment will be beneficial],” argues Tony Wyss-Coray, the Stanford neuroscientist behind a key 2014 mice parabiosis study. For one thing, Karmazin’s trial does not use a placebo control group and participants can be as young as 35.

Critics have also pointed to the dangers of unnecessarily exposing people to the potential risks of blood transfusions, which include hives, lung injury and fatal infections.

Others have argued that the treatment amounts to a scam exploiting the hype around the untested medical properties of young people’s blood.

“People want to believe that young blood restores youth, even though we don’t have evidence that it works in humans and we don’t understand the mechanism of how mice look younger,” Wyss-Coray told the MIT Technology Review.

And then there’s the murky ethics of buying blood that young people might have thought they were donating to those in medical need, and using it for expensive, experimental treatments.

While US plasma donation sites normally offer a stipend of $20-50 (£16-39), they emphasise the life-saving treatments that donations can support, using patient testimonies.

And with a disproportionate number of America’s poorest people regularly donating plasma to make ends meet, this paints a very different picture to the strange world of regenerative medicine, where hundreds of millions of dollars are being invested by the super rich in a bid to outsmart ageing, or even death.

Karmazin has responded to criticisms by saying his study has passed ethical review. In response to criticism about the trial’s cost and methodology, he adds that it would be unfair to give paying participants a placebo.

And, he argues, his patients are immediately reaping the rewards of his treatment: “We’re already seeing people look better after just one treatment.”

Hmm. With pale teenagers, immortality and a lot of blood, it all sounds a bit Twilight to us.