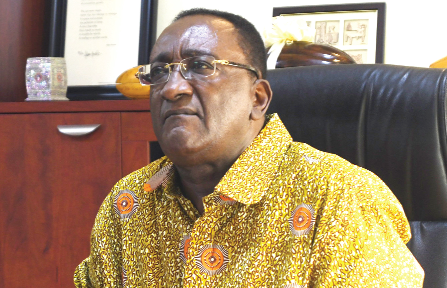 Cabinet has approved a budget of GH¢43.98 million as emergency fund to enable the Ministry of Food and Agriculture to combat the current outbreak of the highly pathogenic avian influenza (HPAI), also known as bird flu.

The amount will also strengthen institutional capacity and readiness for any future incidence, at least in the next five years.

Additionally, Cabinet has given clearance for the recruitment of 1,100 veterinary officers to augment the current human capacity of the service.

The sector Minister, Dr Owusu Afriyie Akoto, who announced this at a media briefing yesterday, said in approving the recruitment, Cabinet directed that half of the recruitment, representing 550 people, should be immediately made, while the remaining recruitment would be made over a two-year period (2023/ 2024).

Currently, 261,137 birds have been culled owing to the outbreak of the flu in seven regions — Greater Accra, Central, Volta, Ashanti, Western North, Western and Upper West.

“With respect to the amount, it will cover the procurement of 33 cross-country 4X4 vehicles, 275 motorbikes and compensation payments to farmers who lost their birds to the flu,” he explained.

Areas to be covered

Dr Akoto further explained that the fund would cover active disease surveillance of domestic and wild birds population, public awareness creation of the situation of the HPAI in the country and training and capacity building for existing and newly recruited staff.

He said other activities would include nationwide engagement with key stakeholders and the stamping out, decontamination and disposal of materials, among others.

The minister said to ensure effective implementation of an action plan developed for containing the HPAI, a nine-member ministerial committee, with membership drawn from allied institutions, would be established immediately to oversee operations.

The committee, he said, would be supported by three-member committees at the regional and the district levels for coordination, monitoring and evaluation purposes.

Dr Akoto said the current HPAI had assumed emergency proportions and needed to be contained with all the urgency and seriousness it deserved.

“The economic cost to the government in terms of the loss of livelihood of farmers, production, productivity and investments, particularly the Rearing for Food and Jobs (RFJs) initiative, will bring the poultry industry down to its knees and compromise the self-sufficiency agenda of the government in the area of food production,” he said.

The minister said managing the HPAI disease called for all hands on deck and, therefore, the public and especially the media would be counted on to support the ministry to achieve its goal of containing the HPAI in the shortest possible time.

“This is necessary to protect the poultry industry and keep alive the vision of transforming the sector,” Dr Akoto explained.

Responding to questions, the Director of the Veterinary Services Division, Dr Patrick Abakeh, said GH¢17 million had been earmarked as compensation for farmers who had suffered losses since the outbreak, adding that another GH¢6.35 million had been budgeted for those whose birds might die between now and December this year.

He said funds had also been set aside for the stamping out, decontamination and disposal of materials, explaining that those were problems because of financial challenges facing the directorate.

Dr Abakeh described the intervention by the government as one of the largest resources at a single time the service had received.

He added that the service was virtually on its knees, operating with a human capital of 10 per cent.