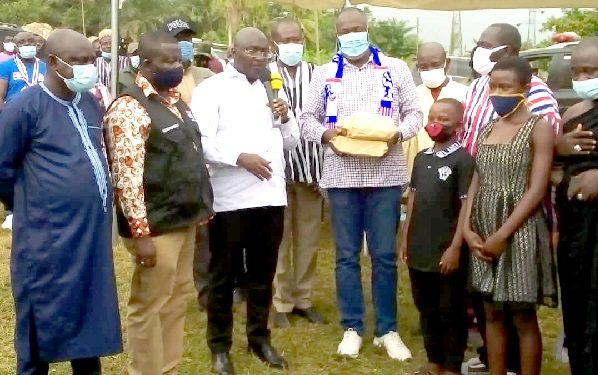 The Vice-President, Dr Mahamudu Bawumia, has presented GH¢200,000 in cash to the victims of the collapsed Church of Prosperity building at Akyem Batabi, near Oda, in the Eastern Region.

The beneficiaries of the gesture are the eight survivors and the representatives of the 22 who died in the disaster on Tuesday, October 20, 2020.

Dr Bawumia made the presentation yesterday when he visited the site of the disaster and then held a meeting with the survivors and relatives of the deceased.

He promised that the government would take over all the medical expenses of the survivors.

At the same event, the Chief Executive Officer (CEO) of Alfa Gold Ghana Limited, Mr Alfred Nyarko Kissi, presented a cheque for GH¢10,000 for the upkeep of the eight survivors and the funeral expenses of the 22.

At the ceremony, Dr Bawumia wished the survivors speedy recovery and consoled the families of the dead.

He commended the rescue team, made up of the National Disaster Management Organisation (NADMO), the National Ambulance Service, the Ghana National Fire Service, soldiers from the 48 Engineers Regiment and the Achiase Jungle Warfare School, as well as volunteers from the neighbouring communities, for a yeoman’s job.

He also praised Mr Kwabena Buahene, aka Cote d’Ivoire, an Oda-based taxi driver, for his contributions towards the removal of the 30 people (both living and dead).

He promised him that the government would reward him in due course.

The Vice-President also appealed to the public to guard against such unnatural disasters which led to loss of precious lives and property and also dissipated the resources meant for the development of the country.

The Eastern Regional Minister, Mr Eric Kwakye Darfour, briefed the Vice-President on the disaster and said the construction of the five-storey uncompleted church building started in 1997.

He said the building was constructed with poor quality materials, including inferior iron rods, adding that the sixth floor was under construction when it collapsed.

He said the founder and leader of the church, Mr Isaac Ofori, aka Akoa Isaac, used cheap labour from the church members instead of recruiting competent artisans for the huge project.

The Regional Minister commended members of the search and rescue team for their commitment to the success of the rescue effort.

He also praised the District Chief Executive (DCE) for Asene-Manso-Akroso, Mr Alex Incoom, for providing the necessary logistic support for the search and rescue team members.

Present at the ceremony were the Director-General of NADMO, Mr Eric Nana Agyeman Prempeh; the Member of Parliament for Asene-Manso-Akroso, Mr George Kwame Aboagye, and the Chief Executive of the Ghana Cocoa Board, Mr Joseph Boahen Aidoo.